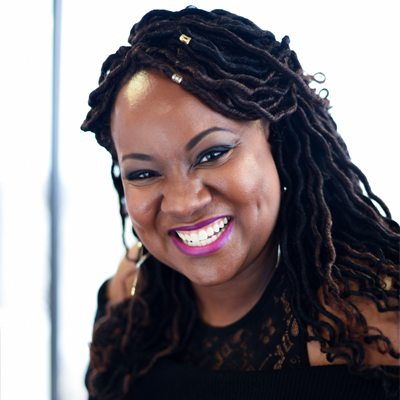 While she holds several titles, when you meet Quniana Futrell, you are meeting a woman whose purpose cannot be contained. Whether you are experiencing her from behind the camera, front and center on a stage with a microphone, or in intimate conversation, what you see is exactly what you get. A multi-faceted creator. A speaker who is unafraid to tell her truth. A woman who transforms every space—and life—that she steps into.

The epitome of resilience, Quniana’s life is a testimony to turning pain into power. As a young woman, her own mother was incarcerated, leaving her lost in more ways than she could imagine. It would take years of misplaced anger, shattered self-esteem and grief for Quniana to forgive her mom, thankfully she did her healing work before she died hours after being released from prison. Now fueled by a mission to help others heal from their own momma trauma, or any other trial life has thrown their way, she shows us all what a true champion looks like—not someone we can look up to, but look next to, for the motivation to shift our lives.

An award-winning director and executive producer who has been recognized by local and international media outlets for her work, Quniana is masterful at storytelling. Her docu-series, Why My Mom, grapples with the deep-seated issues of pain and forgiveness that few can tackle and tell with such compassion and humanity. Her work introduces us to women who have not succumbed to their pain but are living their way through it. With her projects, Quniana is giving the world a new lens through which to see everyday black women—raw, relatable, and refreshingly honest in ways that give us permission to be the same.

As a speaker, expert trainer, and coach, Quniana transforms lives across the globe. Beloved by organizations, churches, campuses, and audiences everywhere, she ignites stages from the US to Uganda with her signature talk, Unleash the Champion®. Known for sharing her story in a no-holds-barred way, she captivates and unleashes attendees to find the freedom from trauma that catapults them to their next level. A Certified Trauma Professional, Quniana also brings her expertise and lived experiences to her individual and group coaching. Through her proven Trauma Ain’t Normal® program, she builds champions from the inside out by guiding participants through a deeply personal healing process that takes them from wounded to winning.

A believer in lifting others as she climbs, Quniana is as passionate about her philanthropy work as she is about everything else she does. But she doesn’t simply give—she empowers. Living her life by the motto, “Change the Family, Change the World®”, she established her 501c3, Building Resilience in Communities, Inc., which restores hope for families impacted by incarceration. Her acclaimed curriculum-based training teaches parents, care providers, and professionals how to support children living through the trauma of family separation due to incarceration.

Quniana is also a member of the illustrious Delta Sigma Theta Sorority Incorporated and is committed to making a change in her community.

Allow me to help you Champion your Trauma!